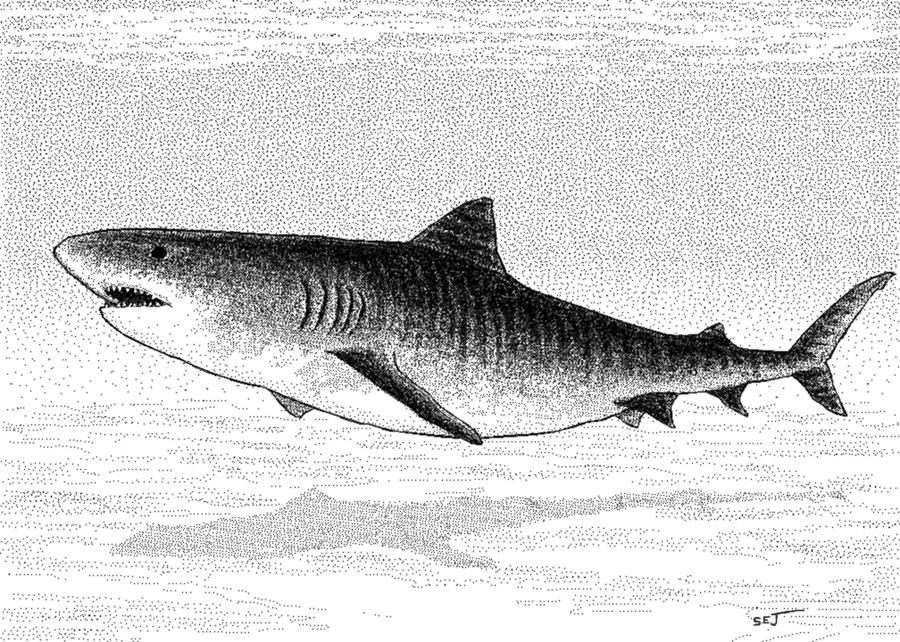 The tiger shark is a large shark with a dark striped pattern across it's back. There are a lot of tiger sharks in Hawaiian waters but they usually stay off shore and aren't seen very often. They are second in size and fierceness only to the Great White sharks that may occasionally visit Hawaiian waters. Tiger sharks like to feed on turtles and occasionally attack surfers, most likely because they mistake them for turtles floating on the surface. The ancient Hawaiians respected and reverenced the big sharks and some had the tiger shark as their amakua, or family protector.
The original was a hand pulled lithographic print made off of an artist created polyester printing plate. This print was made using a stipple technique on the plate to create a form of shading even though the lithographic printing method only prints one solid color for each mark. The artist also created a slight haze around each dot by inking with a very oily ink so some of the color seeped into the open spaces around the dots. This is part of the creative hand printing process that a machine can't perform. It makes for a more subtle and artistic look. It was made to be a 6X8" print, and by adding a 1 inch wide matting, it was made to fit an 8X10 inch standard frame.
The artist has done this series of prints as if he was the assigned artist aboard Captain Cook's ship the Endeavour as he discovered many islands, including Hawaii in the 1700's. A ship's artist would prepare his sketches and paintings to be published when the expedition got back to Europe so the public could see the wonderful sights of the South Seas. Usually these works of art were published as lithographs, in much the same way as Mr. Jorgensen does here. The scenes have no modern buildings in them, the plants and flowers and animals are presented in a "Scientific" drawing form. Just like the ship's artist would do.