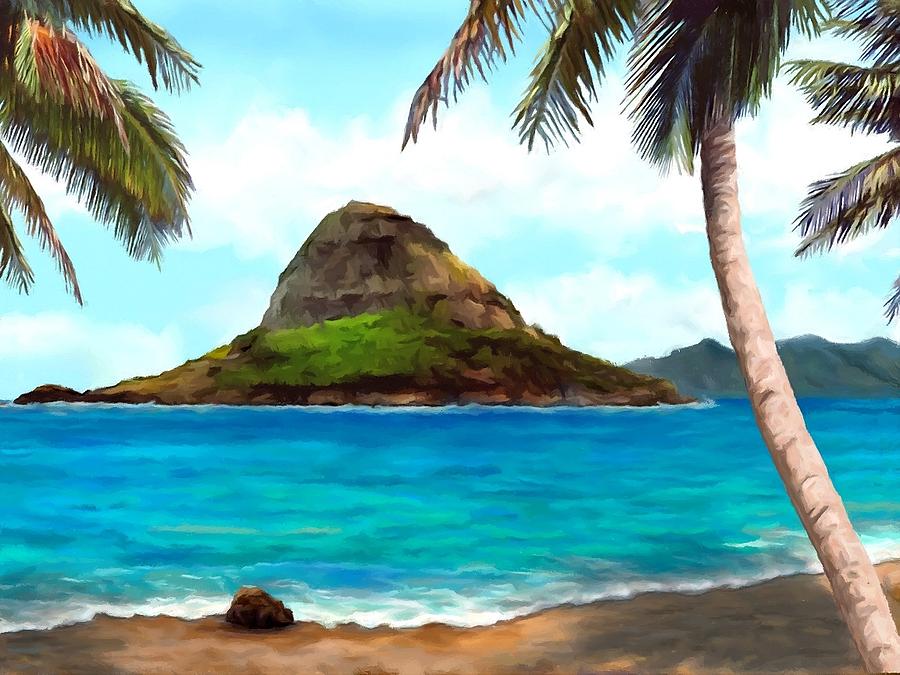 This is from my digital painting of a small Hawaiian island off the Windward side of Oahu, called Mokoli'i by the Hawaiians, but known locally as Chinaman's Hat. It features coconut palms slowly swaying in the breeze. I decided to paint this because I saw others selling generic (Caribbean) tropical
island scenes with a bunch of palm trees, and it seemed to be a popular type of image, very relaxing. But in Hawaii? You should be selling Hawaiian scenes, we have plenty of great scenes and views here in Hawaii. Why not palm tree scenes with a distinctive Hawaiian flair? Then I remembered a guy selling small windward seascapes with palm trees casting their shadows on the sand and lazy sea on the zoo fence. He did pastels that at first looked like photos, and his work was popular. So I put together a sketch that included a popular windward island, with palms.
From an Original multimedia Print, (which was a Giclee full-color design made just for the smaller sized print, but based on the artists large sized digital painting with some hand printed lithographic, block printing, and silkscreen over-lay printing added). If one reduces a digital original too much to make a smaller print, then one loses the artistic strokes and brush work and the resulting giclee print looks like a photograph of artwork, not like real artwork. For my smaller prints I have re-energized the print by reworking the digital file to make more visible and expressive brush strokes and manipulative marks, making it a new art work even though it looks much like, and is based on the much larger painting/print. It was made to be a 6X8" print, and by adding a 1 inch wide matting, it was made to fit an 8X10 inch standard frame.
The artist has done this series of prints as if he was the assigned artist aboard Captain Cook's ship the Endeavour as he discovered many islands, including Hawaii in the 1700's. A ship's artist would prepare his sketches and paintings to be published when the expedition got back to Europe so the public could see the wonderful sights of the South Seas. Usually these works of art were published as lithographs, and Mr. Jorgensen has used a bit of old-fashioned hand printing on his full color mixed media prints such as this one. The scenes have no modern buildings in them, the plants and flowers and animals are presented in a "Scientific" drawing form. Just like the ship's artist would do.